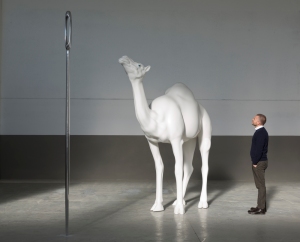 Last week the world (Fox News and Buzz Feed), had a shocking announcement/expose on hand – the government was being asked by one of its agencies to purchase a work of art for display at the American embassy in Pakistan that was valued at $400,000. The news outlets, of course, screamed that this was tax payer money, and how dare we place a $400,000 sculpture in a place where the annual income is $1,250.

I would like to step back 100,000 steps to make clear a couple of disgraceful misuses of government funds, all of wish I have seen first hand. While $400,000 seems like a lot of money, my very small town that I live in (population 21,000), just had a football field re-turfed for $350,000. I am 100% against my tax payer money going towards this. While in California I attended an Arts Council meeting in Sacramento – they are open to the public, I urge you to attend your state council on the arts meetings – at this particular meeting, where no one was in attendance save for me and four others, they proceeded to allocate $1,500 to 100 or so organizations, and then reported that the over $1 million raised through DMV sales of special interest license plates for the arts would be allocated to the environmental fund and not the arts in education fund it purported to benefit. While previously employed I was hired by the government to babysit another consulting company’s work – yes this happens all the time for security purposes – pay twice for one job. The current line item for arts in education programming funds during the 2014 Obama administration is $0, and there are virtually no art programs fully supported by public schools across the board. So to say that tax payer money was not addressed correctly for a piece of art in an embassy is completely bonkers – government spending is all bonkers, especially when it comes to the arts.

The subject matter of the artwork in question, John Baldessari’s “Camel Contemplating Needle” is perfectly suited for the context of the embassy in Pakistan. It is a large white camel staring at the eye of a sewing needle. These are incredibly potent images which have layers of meaning – for a camel to cross the eye of a needle has tremendous significance across the religious spectrum. Not only that, but in a majority Muslim country, creating a figurative visual such as this (human forms are not OK in Islamic art, and while this isn’t depicting a human it addresses human scale as a sculpture), it is an incredibly subtle and powerful form of dialog for this audience.

The analogy of the camel going through the eye of a needle is the idea of breaking through to something – a communication quantum leap perhaps? If these discussions happen between nations of the West and the Middle East theoretically it is priceless. For a culture that forbids making a visual representation of god, art becomes extremely potent, why not use it as a catalyst for discussion?

Lastly, the offending document that was published by Buzz Feed simply has the “value” of the work of art as $400,000, not the cost. The artist and dealer may have had another form of deal to tender – meaning for less, or perhaps the artist would donate proceeds of the sale to a cause. Who knows. While the original sculpture was seen in the context of the Hall Winery in Napa Valley – the same sculpture in the American embassy of Pakistan has an absolutely different meaning. I would be proud as an American to have this sculpture demonstrate our commitment to advancing communication with the Middle East. And hello…$400,000 is 1/10th of a cent per person of contribution. So this is not tax payers’ dollars, but fractions of a penny.

The work is amazing, and by one of our national treasures, John Baldessari. Showing the work of a living artist in our embassies abroad is an important gesture of the commitment we have around the arts in this country. Let’s not ruin a good thing people. It’s a gift to the impoverished people of Pakistan – art is a gift. Please read Lewis Hyde’s The Gift as a reminder. And next time let’s spend $400,000 on 1,000 new art teachers across the nation. Peace.

To those who reject Our signs and treat them with arrogance, no opening will there be of the gates of heaven, nor will they enter the garden, until the camel can pass through the eye of the needle: Such is Our reward for those in sin. – English interpretation of the Quran

The Holy One said, open for me a door as big as a needle’s eye and I will open for you a door through which may enter tents and [camels?] – Midrash Rabbah, The Song of Songs, 5.3